Poway, CA /Press/November 27, 2018 – Dr. Darrow Perkins, Jr., TH.D Head Pastor at Mesa View Baptist Church was recognized as a Top Professional of North America 2018 – 2019 by The Who’s Who Directories. The accomplishments and achievements attained by Dr. Darrow Perkins, Jr., in the field of Ministry Leader Services warrants inclusion into the Top Professionals of North America.

“A leader is one who knows the way, goes the way, and shows the way.” Pastor, Dr. Darrow Perkins, Jr. 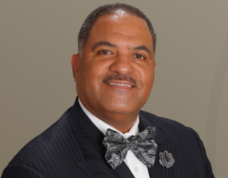 Dr. Darrow Perkins, Jr. was born in August 1965 in Baton Rouge, Louisiana, the fourth of five children of Lilly and the late Darrow Perkins, Sr. He accepted Jesus Christ as his Lord and Savior at the age of seven and was baptized at the Beech Grove Baptist Church in Baton Rouge, LA under the pastorate of the Rev. Alexander. In 1975, the family relocated to New Orleans, LA where he graduated from West Jefferson High School in Harvey, Louisiana on May 10, 1983. After graduation, he entered the U. S. Marine Corps on May 26, 1983.

While serving in the Marine Corps, He rededicated his life to the Lord in March of 1990 at the Mount Olive Missionary Baptist Church in Okinawa, Japan under the pastorate of the Rev. Charles S. Reynolds, Sr. It was there he was ordained a Deacon in February 1991. During June 1991, he transferred to Millington, Tennessee and became a member of the First Baptist Church (now Historical First Baptist Church) under the pastorate of the Rev. Quintin R. Smith, Sr., where he accepted his call into the Gospel Ministry in December 1992. He preached his first sermon and licensed to preach the Gospel in April 1993, and in November of that year, he was ordained to preach the Gospel. Due to military reassignment, the family relocated to San Diego, CA and in August 1995, he became a member of the Linda Vista Second Baptist Church in San Diego, CA under the pastorate of Dr. David C. Greene. There he served as a Sunday School Teacher, Minister of Evangelism and Outreach, Techniques of Teaching Instructor, Pastor of Christian Education, and implemented and served as the first Facilitator for the Marriage Enrichment Ministry. He began his current work in the Lord as the Pastor of Mesa View Baptist Church in May 2002. Since assuming the pastorate, the church has grown, ministries have increased, and God has “enlarged our territory” with the multi-million dollar purchase of our current church campus in Poway, CA in 2012.

During his time in the U. S. Marine Corps, Dr. Perkins had duty stations in Subic Bay, Republic of the Philippines; New Orleans, LA; Okinawa, Japan, Millington, TN, Oceanside and San Diego, CA. While stationed in Oceanside, he deployed twice to the Persian Gulf region prior to the beginning of Operation Enduring Freedom in 2001.

He served his country honorably and retired from the United States Marine Corps as a Chief Warrant Officer W3 on September 1, 2003 after 20 years of honest and faithful service. For his service, he received numerous medals, awards, and commendations.

In addition to his current responsibilities, Dr. Perkins facilitated a Marriage Enrichment Conference in Monroe, NC and a Marriage Enrichment Cruise aboard the MS Paradise to the Cayman Islands and Jamaica. He was an instructor for Immanuel Bible College in Lemon Grove, CA, and has been a featured contributing writer for the Soul of San Diego Magazine. He has served as the Recording, Corresponding, and General Secretary for the Progressive Baptist District Association of Southern California; Chairman of the Foreign Mission Board of the California Missionary Baptist State Convention; and as a member of the Foreign Mission Board of the National Missionary Baptist Convention of America.

The Lord has used him to preach in the United States; while on deployment aboard the USS Peleliu; in the Kingdom of Bahrain; teaching pastor’s conferences in Zimbabwe and Malawi, Africa; preaching crusades in Malawi, Africa; and is a conference speaker on Christian Stewardship.

In 2015, he was blessed by the Lord to publish his first book, “Principles of Kingdom Living: How to Live Right in a World Gone Wrong,” and his second book entitled, “Which Church Are You? Are You Real or Just Going Through the Motions?” was published in 2017.

In 2018, the San Diego Voice and Viewpoint Newspaper presented him with the “Good Shepherd Award,” and the San Diego Prestige Awards selected him as “Pastor of the Year – North County.”

Dr. Perkins and his wife Teresa have been married since August 1985 and have three grown children: Stephanie, Tara, Darrow III, and one grandson.

Be the first to comment on "Top Professional – Dr. Darrow Perkins, Jr."